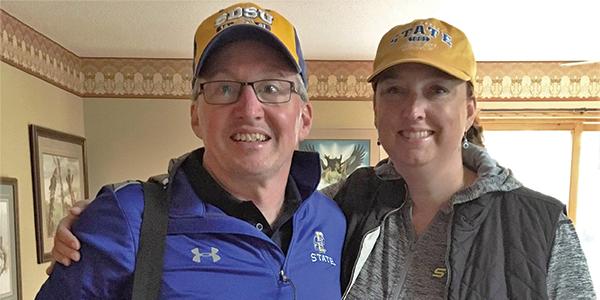 Sandra Hutches was into politics. She knew what she believed and who she believed in. And the journalism, political science, and history major shared these thoughts and beliefs with other Jackrabbits in her weekly Collegian column.

"She was the first person I met who was into politics. Sandy ran the Young Republican's campus campaign for Bob Dole," Shawn said.

Sandy would go on to a successful career that blended her savvy for writing and politics. She worked for a newspaper, in communications for a trade organization, and then spent nearly two decades serving on the communications team for the Minnesota Legislature. In 2017, she launched her own writing and graphic design business, Hale Design.

When Shawn and Sandy met through mutual friends on fourth floor of Young Hall, Shawn was a freshman and Sandy was a sophomore. It was fall of 1986. Initially, they were just friends. "Back then, I was not brave enough to admit that I liked her more than a friend. And then, three years after we met, it just finally happened," Shawn recalled.

In 1992, they chose to return to campus to get married in the campus Catholic Parish. It was the church where Shawn grew up.

Today, Shawn enjoys talking about Sandy - it's a way to honor the extraordinary life she lived. After nearly 30 years of marriage, he lost Sandy to cancer in January 2020. "It is important to me to tell stories about her to keep her memory spoken and alive."

In the wake of her death, Shawn established the Sandra A. Whalen Scholarship to uphold her legacy. "It is a good way to honor her and keep her name alive. This scholarship is something positive to come out of the tragedy and grief," he said.

Shawn worked with SDSU gift planning officer Ned Gavlick to establish a scholarship that truly reflects Sandy and her interests, and then included SDSU in his estate plans to reinforce the scholarship many years from now. The journalism scholarship "...gives preference to students from South Dakota who are pursuing studies in journalism, communication studies, or political science."

A Brookings native, SDSU was very much a part of Shawn's childhood. So, when it came time for him to start thinking about where he would attend college, Shawn said SDSU made the most sense.

An affordable college education mattered to Shawn. "I paid for school myself. My parents instilled in us to start saving for college at a very young age. I got a paper route when I was 10 and was mowing lawns for my college fund."

To help cover tuition, Shawn worked 20-plus hours a week - first for Kmart, then for Daktronics as an intern in the application engineering department. "I got this internship where I actually got to go upstairs and work with engineers who did custom projects. I got really well-rounded exposure at Daktronics."

Shawn is an Associate Electrical Engineer/ Communications & Security Specialist for Burns & McDonnell. He credits the Daktronics internship and the education he received at SDSU with helping him land his first job.

"When I graduated in 1991, the job market was terrible," he said. He got hired after a campus job fair interview. "I remember during the interview I could share stories of work experience from my internship at Daktronics."

Shawn also credits his parents, John and Peggy, both SDSU journalism graduates, for helping him to develop his communication skills.

When he first met Sandy, the fact that she was a journalism major gave them something to talk about. "I come from a family of journalists," explained Shawn.

In fact, his grandpa owned several newspapers throughout the Midwest. In recognition of this legacy, the Whalen family funds the John and Genevieve Whalen Journalism Scholarship to honor Shawn's grandparents. This scholarship would familiarize Shawn to philanthropic giving at SDSU and set the stage for his own generosity later in life.

While Shawn spent most of his school week at State working and studying, Sandy was actively involved in campus activities. In addition to writing for the Collegian and Young Republicans, she served as the chairperson of the 1987 Hobo Day Parade.

"So much of our reason for meeting was SDSU, and we came back to celebrate Hobo Day nearly every year. As alumni, SDSU was still a good part of our life," he said.

The scholarship Shawn established is now part of Sandy's legacy. "For years to come, I want to get to see a South Dakota student get a scholarship in journalism that has her name attached to it," explained Shawn, "and to have students read about her and understand the life she had."