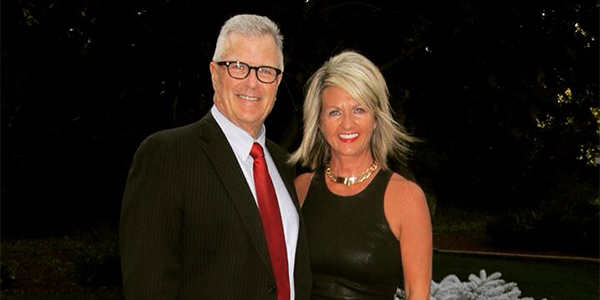 As the parents of student-athletes, Richard and Mary Helsper have seen many athletic events. In particular, they are very fond of SDSU athletics, where two of their children participated in football and women's basketball.

"What made such a significant impression on us over the years was the dedication and hard work of all athletes," Rich said.

The Helspers are earmarking proceeds from 150 acres of land west of Volga for scholarships in football and basketball at SDSU. They are part of an increasing number of donors drawn to the benefits of the Jackrabbits Land Legacy, a program that allows donors to create a legacy through the gift of land and real estate.

Three of the Helspers' four children played varsity sports for different universities in South Dakota. Nicole started as a basketball walk-on at SDSU before transferring to Augustana University in Sioux Falls. Elizabeth also played basketball at Augustana for four years. Kaylin was a gifted high school player, but chose not to pursue it in college. The Helspers' son, Richard John II, known as RJ, participated in football at the University of Sioux Falls before transferring to SDSU, where he participated for a short time as a walk-on.

What they saw in their own children and their teammates was a drive to succeed on the court, on the football field, and in life.

"It is truly a balancing act to maintain good grades while competing athletically at the collegiate level," Mary said. "Being a student-athlete enhances the student-athlete's work ethic and their ability to persevere and overcome adversity in life, which may ultimately make them better employees, better parents, and a better person."

The Helspers credit the discipline and drive their children learned in sports with their success in life. Their children applied that learned drive and determination into their studies and subsequently their chosen careers: Nicole and Elizabeth work in the medical field while Kaylin and RJ pursued education/human sciences and aviation at SDSU, respectively. Instead of "leaving it all on the court", the Helsper family knows the values of student athletics plays a key role in their careers as adults.

The fathers of Rich and Mary both earned bachelor's degrees from South Dakota State College. Rich's father, Clyde G. Helsper, graduated in 1948 with a degree in general agriculture with an emphasis in dairy science after serving four years in the Navy. Mary's father, Vern Beare, graduated in 1941 with a degree in animal science. Rich graduated from SDSU in 1974 with majors in political science and English, then earned his law degree at Southern Methodist University in Dallas in 1977.

Mary graduated with a bachelor's in communication disorders from SDSU in 1988. She worked as a speech language pathologist for the Brookings School District.

At law school, Rich initially found himself attracted to all that the big city had to offer. In his third year, as he was applying to Dallas law firms, he unexpectedly got an offer of employment from George Mickelson to practice law in Brookings. Wanting to return home, Rich accepted the offer. They formed their own firm and would be partners until Mickelson was elected South Dakota's governor in 1986.

Also in 1986, Rich and Mary were married in Brookings. As each of their children entered approximately third grade, they spent countless hours traveling with their daughters and son to basketball and football games. Their oldest daughters played on all-star teams with other players from across the state, some of whom went on to play at SDSU.

Throughout the years, Rich noticed something that prompted his desire to give to SDSU.

"Some of these kids are not only a full-time student, a full-time football or basketball player, they're even obtaining employment in Brookings," Rich said. "No athlete who participates full-time at their chosen sport should have to go out and obtain employment in Brookings during the time that they are participating in their athletic endeavor. We should be able to reward that young man or young woman with a scholarship."

Rich and Mary appreciated the additional tax deduction, but were motivated more to know their gift would help future student-athletes.

The life estate allows them to receive income from the land. When it passes to the Foundation, the organization will be able to sell the land or continue its ownership and collect rent to fund the Helspers' scholarships.

"A charitable life estate allows us to retain the benefits of the income from the land during our lifetime," Rich said. "Upon our death, our life estate terminates and is invested fully with SDSU. It fit our estate planning needs perfectly."

"Our kids participated in those sports," Mary said, noting that the three who participated in collegiate sports benefited from athletic scholarships. "So it's a little bit more near and dear to our hearts."