Trust Allows Family to Give to Their Children, SDSU 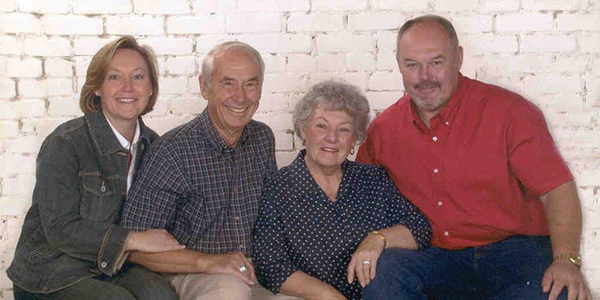 A desire to fund a scholarship at SDSU has led Chuck and Donna Hendricks to create a trust that will provide an income for their children and a source of funding for the scholarship.

The Hendricks have created a charitable remainder trust to which their assets will be transferred after they both pass. The trust will fund the family's scholarship in addition to paying their children, Lane and Cheryl, an annual income. On their passing, the trust's assets will continue to fund the Hendricks Family Scholarship Endowment at SDSU.

Chuck said making annual scholarship donations to the SDSU Foundation "led us to become interested in establishing a more long-term arrangement for funding scholarships. This led to establishing a revocable living trust that would ultimately become a charitable remainder trust to fund scholarships after we are deceased."

Chuck's relationship with SDSU began when he enrolled as an engineering student in the fall of 1950. In his third year, he was drafted to serve in the U.S. Army during the Korean conflict.

He returned to SDSU in the fall of 1955 and married Donna on June 1 of that year. A graduate of Northern State in Aberdeen, Donna taught at a one-room school south of Volga. Eventually they moved to a farmstead owned by the agricultural engineering department, working off some of their rent by making improvements to the property.

"We made lifelong friends with some of my classmates who we still stay in contact with," Chuck said. "Even though we have lived most of our working lives in other states, we still have a fondness for South Dakota and specifically SDSU."

Chuck graduated with a degree in agricultural engineering. He joined the U.S. Forest Service in 1958, working on engineering assignments throughout the west. He moved into management and served in positions at Clear Creek Job Corps Center in Carson City, Nevada; Shawnee National Forest in Illinois; and Caribou National Forest in Idaho. He retired in 1992 after serving as a director of watershed and mineral management for the Rocky Mountain Region in Denver, Colorado.

Donna taught at rural schools in Day and Brookings counties until their first child was born in 1956. After the children were raised, she went to work in retail merchandising and served many church and civic organizations.

The terms and preferences for the Hendricks Family Scholarship reflect the lives of Chuck, Donna, and their children, with preference given to an incoming freshman from Chuck's hometown of Lake Preston, and Day or Kingsbury counties. Donna was raised in Day County.

The scholarship is offered to students majoring in engineering, agricultural sciences, nutrition and food science, or are planning to pursue teacher education.

The Hendricks' son, Lane, is an engineering graduate from the School of Mines at Rolla, Missouri. Daughter, Cheryl, is a graduate of Idaho State University with a degree in dietetics and now a registered dietitian. Cheryl has also designated the SDSU Foundation to be a beneficiary of an IRA which will help fund the Hendricks Family Scholarship.

Chuck and Donna saw the SDSU Foundation as a way to create a lasting legacy. According to Chuck, setting up the trust was handled with a "minimum of difficulty."

"The Foundation appeared to be a financially responsible mechanism that would transcend our lifetime," Chuck said. "The Foundation's fiduciary principles and ethics were a good fit for our personal standards and provided an acceptable method for accomplishing our family goals."